When I’m not under contract I’m often coming up with television programme ideas and developing them into treatments, along with writing drama for film, television and radio.

STORY #1
Ghost/Horror/Thriller
An absentee father reunites with his daughter only to witness her death and her transference to the afterlife. But there’s only one way he can bring her back.

STORY #2
Comedy / Caper
A jailed art thief agrees to a revolutionary new medical procedure to secure freedom while planning the world’s biggest heist – but discovers a much bigger goal.

STORY #3
Comedy
A lonesome Irish farmer is matched to a Russian beauty that turns on him by creating a sex shop.

STORY #4
Foreign medical surgeons target the UK to save a mobster.

In an effort to get one horror movie financed I created a one page “graphic novel” trailer. Alas, it didn’t do any business and I re wrote it again anyway. But useful stills for business cards! 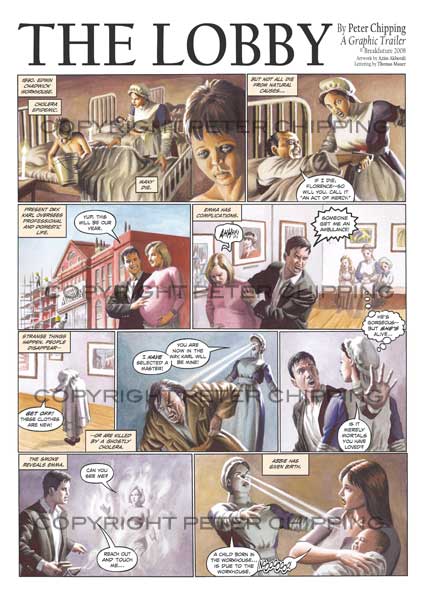